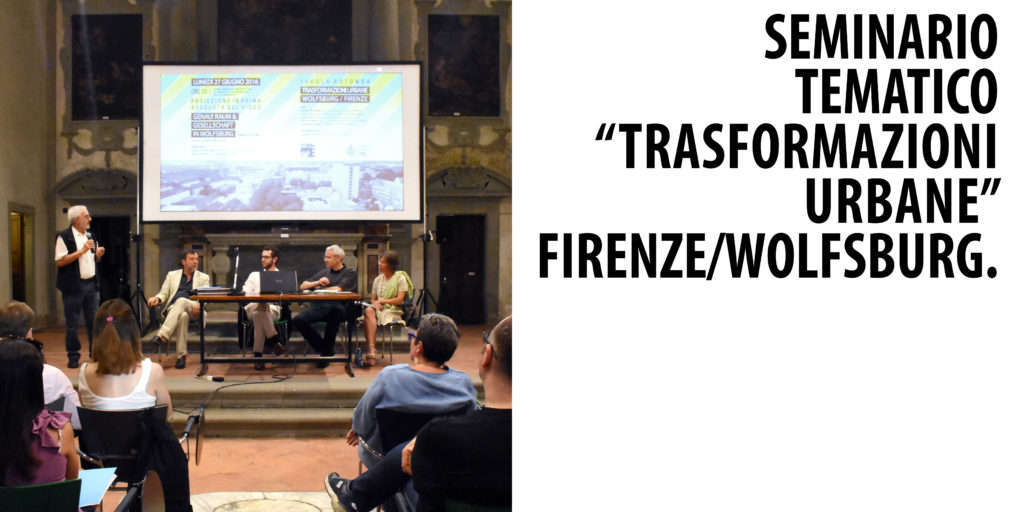 On 27th June 2016, at the University of Florence, in the former Church of Santa Verdiana, two MEDIARC events are taked place, both dedicated on the city of Wolfsburg.

The seminar was opened with the speech of the Rector the University of Florence Prof. Luigi Dei. Prof. Cosimo Carlo Buccolieri, President of the MEDIARC Scientific Committee, introduced with Prof. Alberto Di Cintio, art director of the MEDIARC Festival. The round table “Urban development: Firenze/Wolfsburg” analyzed the concept of “urban development” in two diametrically opposed realities, with interventions of Kai-Uwe Hirschheide Director of the Urban Sector of the city of Wolfsburg, Lorenzo Perra Head of Urban Planning of Municipality of Florence, Maria De Santis Teatcher of the Architecture Department, Tommaso de Sando  Project Manager of Neuland Wohnungsgesellschaft of Wolfsburg. The debate contined after the screening of the documentary “Genau! Raum & Gesellshaft in Wolfsburg (Space & Society in Wolfsburg)” directed by arch. Tommaso de Sando.

Two shared experiences that show continuity and interest between Florence and Wolfsburg: study the urban development theme throught a “horizontal expansion”of the city (based on the new construction) – with a view on the new districts – and an analysis on the hard reality of the suburbs. This occasion put at the center of the research the urban and social development that the city of Wolfsburg is living: an example which can become a case-study for other realities, not only european.